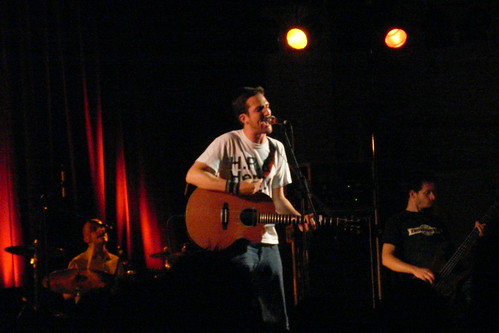 Through attending this gig, I have learnt that Frank Turner is a very nice man. Why? Because due to not being able to attend the 2000 Trees Festival as he was supporting the Offspring in America, he decided to put on a very cheap gig afterwards to make up for it. At £5 a ticket, how could I say no? However, it wasn’t the cheap ticket price that lured me in. If you read my Gaslight Anthem review, you’ll know that I thought Frank Turner was the best thing about that show. And this time, I’ll tell you how he fares as the main attraction.

First though, a couple of thoughts on the venue. Cheltenham Town Hall is actually a surprisingly good venue. It’s big, the stage is raised up enough so short people like myself can actually see what’s going on, but be warned, the drinks are extortionate. Even so, I’d definitely consider coming back here if someone good was playing. Unfortunately, that doesn’t really happen because… well… it’s Cheltenham.

Two acts supported Frank tonight, and first up was Joe Summers. Joe Summers looks a bit like a British Kevin Devine, and wore a roguish hat. However, he is no Kevin Devine, and the roguish hat merely served as a distraction for his watered down folk tunes. It was pretty, but it was also self indulgent. Generally, he was a pretty weak act. If you’re into acoustic stuff though, you might like him. Next up was Jim Lockley and the Solemn Sun and they were a lot better! If I could think a genre, I’d say pop-folk? Either way, their songs were catchy and I liked them. My boyfriend, who is ever the cynic, thought they sounded like McFly. Maybe, if McFly were singing about poverty and journeying instead of girls. They did have a lot of unnecessary ba-da-da’s though. And roguish hat man played in this band as well, and he had a tambourine and essentially did… nothing at all!

Both bands were as politely received as possible, but everyone was there for Frank. And I mean everyone. I saw people from all walks of life – even grandparents and their grandkids. Not really to be expected at a gig from the former singer of Million Dead who likes to use various profanities in his songs, but we can go with it. The thing is, I just can’t say it enough – Frank Turner is a fucking genius and one of the best live acts I’ve ever witnessed. He wowed me even more than when he played just by himself at the Gaslight Anthem show, and I thought that was impossible. With a full band, the songs just sound so much fuller and richer. He played a great set, including some songs from his upcoming album ‘Poetry Of The Deed’. Civil Liberties was one such example, as well as new single, The Road. Both of these songs sounded just as impressive as the rest of his extensive back catalogue, and I’m highly anticipating the new album in September. As well as the new stuff, he played a wide range of fan favourites, including The Ballad Of Me And My Friends, Substitute (my favourite!), Casanova Lament and Photosynthesis, all of which went down great with the fans. Frank himself is a very happy and smiley man, and this made everyone else happy and smiley, especially when he came out and played for much longer than he should have done! All in all, it was an absolutely fantastic gig. Go out and see him in October, I promise you won’t regret it.

This site uses Akismet to reduce spam. Learn how your comment data is processed.